According to the Kennel Club, the Queen’s favourite breed the Pembroke Welsh Corgi, are declining in numbers due to the rising popularity of small foreign breeds such as the French bulldog. The ‘Frenchie’ has made it into the top ten most popular dog breeds for the first time this year as well as being joined in the list by the smooth coated and long haired Chihuahua, Boston Terrier and Pug, all whom have increased in popularity. 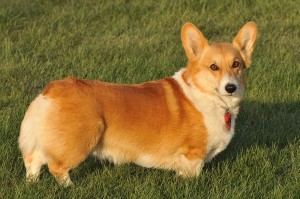 With only 241 Pembroke Welsh Corgis being registered so far this year, it is likely the breed will be under the 300 bench mark line and will be classed as a “vulnerable native breed” by the end of the year. Staggeringly the number of West Highland white terriers and Cavalier King Charles spaniels registered has also dropped by half, according to new statistics.
In comparison the French bulldog, popular with celebrities including Jonathan Ross and Reese Witherspoon, has seen the largest boost in numbers. The Kennel Club reports a 50 per cent rise in the number of registrations in the first three quarters of 2013 alone, with 4,843 dogs registered so far this year.

Caroline Kisko, Kennel Club Secretary, said: “Small dogs are becoming much more popular and whilst in some cases this is because they may be a better fit for particular lifestyles, it is also because people are buying on impulse and going for the most obvious or fashionable choices.”

The Kennel Club has voiced concerns that people are buying dogs on impulse without doing their research on the best breed for them. The organisation’s Discover Dogs event, taking place on November 9 and 10 this year, aims to educate dog owners of the care needs of different breeds.

Read more about the story here